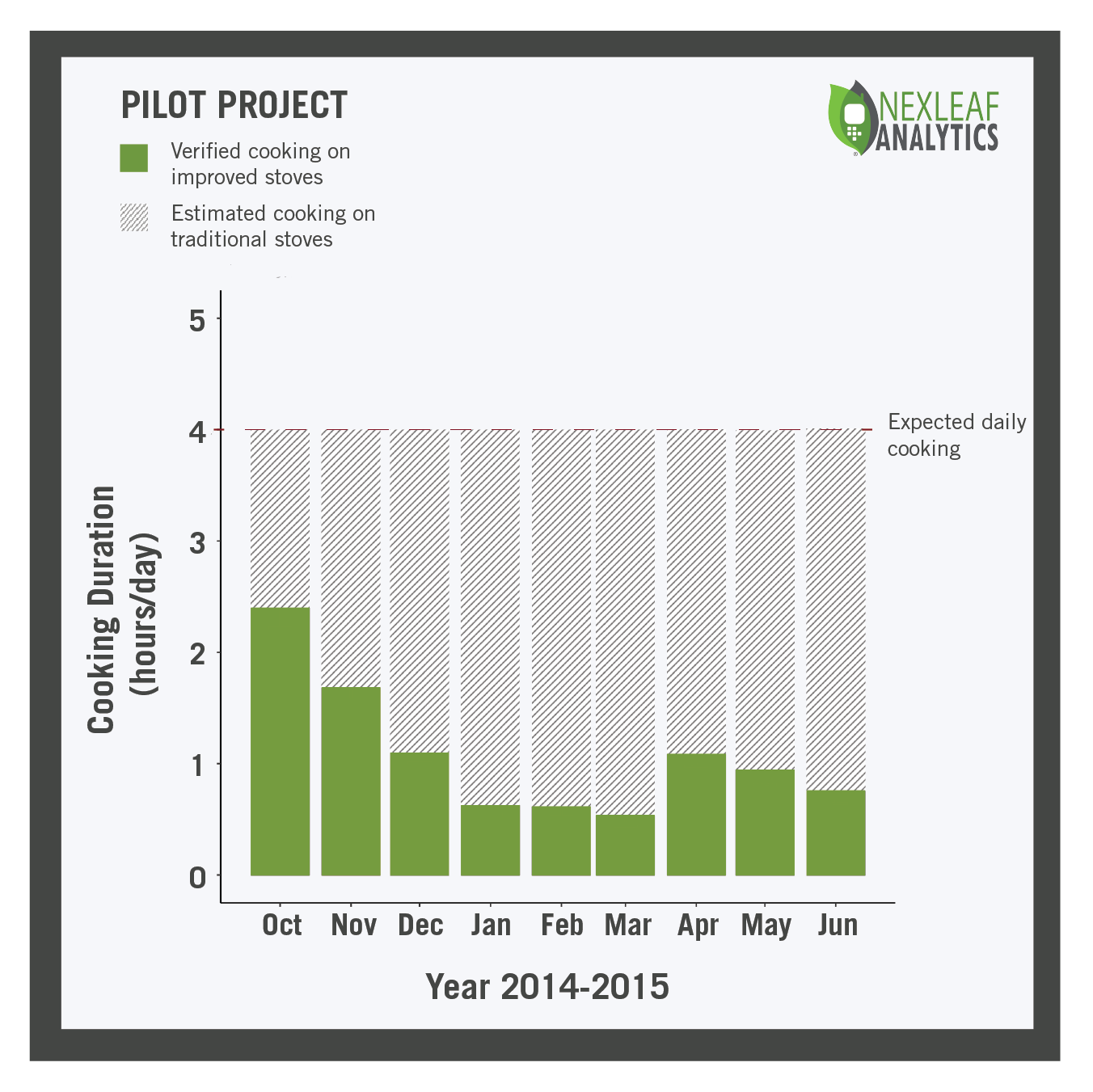 IoT for Development: How Data can Steer Clean Cooking

StoveTrace: How Data Can Help Steer Clean Cooking in the Right Direction 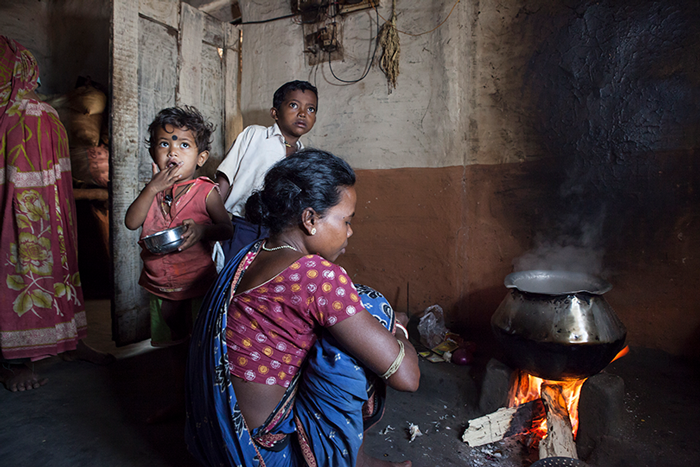 About 3 billion people rely on traditional cookstoves to prepare their food each day. To fuel their hand-made traditional stoves, people burn biomass like firewood inside their homes. This practice harms the families who live in these households and our planet as a whole.

Every year, four million people die from illnesses attributable to household air pollution. Black carbon (BC) is the second largest contributor to global warming, and emissions from traditional cooking practices are a significant global source of BC. For these reasons, changing how people cook has become a major public health and climate change priority.

The world rallied around a solution: introduce cleaner-burning, manufactured cookstoves for the rural poor. The only question that remained was how to make these “improved cookstoves” affordable for people who live on less than $2 a day…or so we thought.

We soon learned, through our Climate Credit Pilot Project program, that there is a lot more to solving this problem than simply getting cleaner-burning stoves into people’s homes.

We soon learned, through our pilot program, that there was a lot more to solving this problem than simply getting cleaner-burning stoves into people’s homes.

Why not just give stoves away?

For this distribution model, we are focused on identifying a sustainable market-based approach that aligns improved cookstove manufacturers with their customers: the individual women who cook. When large NGOs are the customers, improved stove manufacturers offer different incentives, such as bulk pricing, rather than focusing on designing user-friendly stoves or providing after-sales service.

However, we also believe that improved cookstoves are a critical public health intervention, and various contexts around the world require different distribution models, including subsidies and grants.

Improved cookstoves vary in their environmental impact. Forced draft stoves (aka fan/forced air stoves) are among the cleanest-burning improved biomass stoves, but they are also expensive, with some costing $65 USD or more. Project Surya, an international collaboration among Nexleaf Analytics, The Energy and Resources Institute of India, and the University of California San Diego, set out to address the high cost of the cleanest biomass-burning cookstoves.

In 2014, Project Surya launched a solution to enable extremely low-income women in Odisha, India to afford clean cookstoves. The Climate Credit Pilot Project (also known as C2P2) used cutting-edge climate science and Nexleaf’s wireless StoveTrace sensors to provide rural women with access to results-based financing for their climate stewardship. Each rural woman participant received a small loan for a forced draft cookstove. StoveTrace sensors placed on the forced draft stoves detected and uploaded data on cooking events on the clean cookstove. The women then received usage-based deposits to their bank accounts based on the carbon emissions they prevented (or “mitigated”) by cooking on the improved cookstoves.

Using carbon markets as a model, Project Surya tapped into increased financing based on the forced draft stove’s reduction of short-lived climate pollutants (SLCPs) such as black carbon (BC). SLCPs have a far greater warming potential per unit than carbon dioxide, so preventing their release has an even greater impact on the climate than simply reducing the amount of biomass burned. More about this cutting-edge method can be found here.

CO2e, or carbon dioxide equivalent, is a standard unit expressing emissions in terms of an equivalent amount of carbon dioxide. We use CO2e in order to sum the global warming potential of both the CO2 as well as the black carbon emissions mitigated by clean cooking. Learn more about the theoretical underpinnings of CO2e as agreed upon by the world’s leading climate scientists with IPCC.

Addressing traditional cooking has the potential to significantly reduce BC and other SLCPs, which are particularly damaging to the climate.

Based on established literature on cooking practices, we were expecting the StoveTrace sensor data to show about 4 to 5 hours of cooking per household each day on the improved stove. That would mean about 5 tons of CO2e mitigated by each woman every year on the forced draft stove. With a price per metric ton of CO2e set at $6, that meant each woman could pay off her stove in about 2 years.

In November 2016, Nexleaf and Project Surya partners published results from the Climate Credit Pilot Project (C2P2) in the academic journal Nature Climate Change. As reported in the article, findings from the pilot demonstrate that our innovative financing mechanism works. However, our data showed fewer hours of cooking in StoveTrace-equipped households than we were anticipating, especially over time. Instead, women cooked an average of 1.1 hours per day during the first 9 months of the C2P2 program. [(see graph below)]

This finding prompted Nexleaf to investigate the reasons for lower usage with the hopes of improving upon our implementation method. Through a data-driven focus group, we learned that many of the forced draft cookstoves used in this implementation broke. The energy entrepreneur set up to work on the C2P2 project lived many kilometers away from most of the stove users, and he was unequipped to address the high number of broken stoves. We also learned that, even in households without breakage problems, the stoves were not always convenient or easy for the women to use.

Based on our quantitative findings and the post-intervention qualitative analysis, we resolved to make sustained usage of clean cookstoves the goal of our next implementation.

Additionally, our focus group of women cookstove users told us that the climate credit money they were receiving did not make much of a difference to them. Because the women lived far from their banks, they rarely if ever saw the micropayments that we deposited into their bank accounts based on their clean cookstove usage.

Based on our quantitative findings and the post-intervention qualitative analysis, we resolved to make sustained usage of clean cookstoves the goal of our next implementation. We decided to start small, and we tested our new method in just ten homes in Odisha.

Tapping into climate financing as a tool to spread clean cooking is not a new idea. However, many clean cookstove distributors keep the rewards of carbon mitigation for themselves, for instance as a way to subsidize the cost of improved cookstoves.

Project Surya believes that getting the financial rewards of carbon mitigation directly to the women who cook has both strategic and moral benefits. This approach closes the loop between the woman changing her cooking behavior and the market-motivated climate credits generated by CO2e reductions from clean cooking. The poorest 3 billion people will be the hardest hit by global climate change. We work to ensure that all people have access to the benefits of their own carbon emissions mitigation activities, including the monetary benefits.

The lessons we learned from the pilot in Odisha prompted us to improve our method in the following ways:

We introduced our improved Sensor-enabled Climate Financing (SCF) methodology in ten homes in Kontakoli, Odisha starting in October 2016. The first nine months of data clearly demonstrates sustained usage of the clean cookstove. Women cooked an average of 4.0 hours per day, and they maintained high levels of cookstove usage (with some seasonal variation), as shown in the plot below: 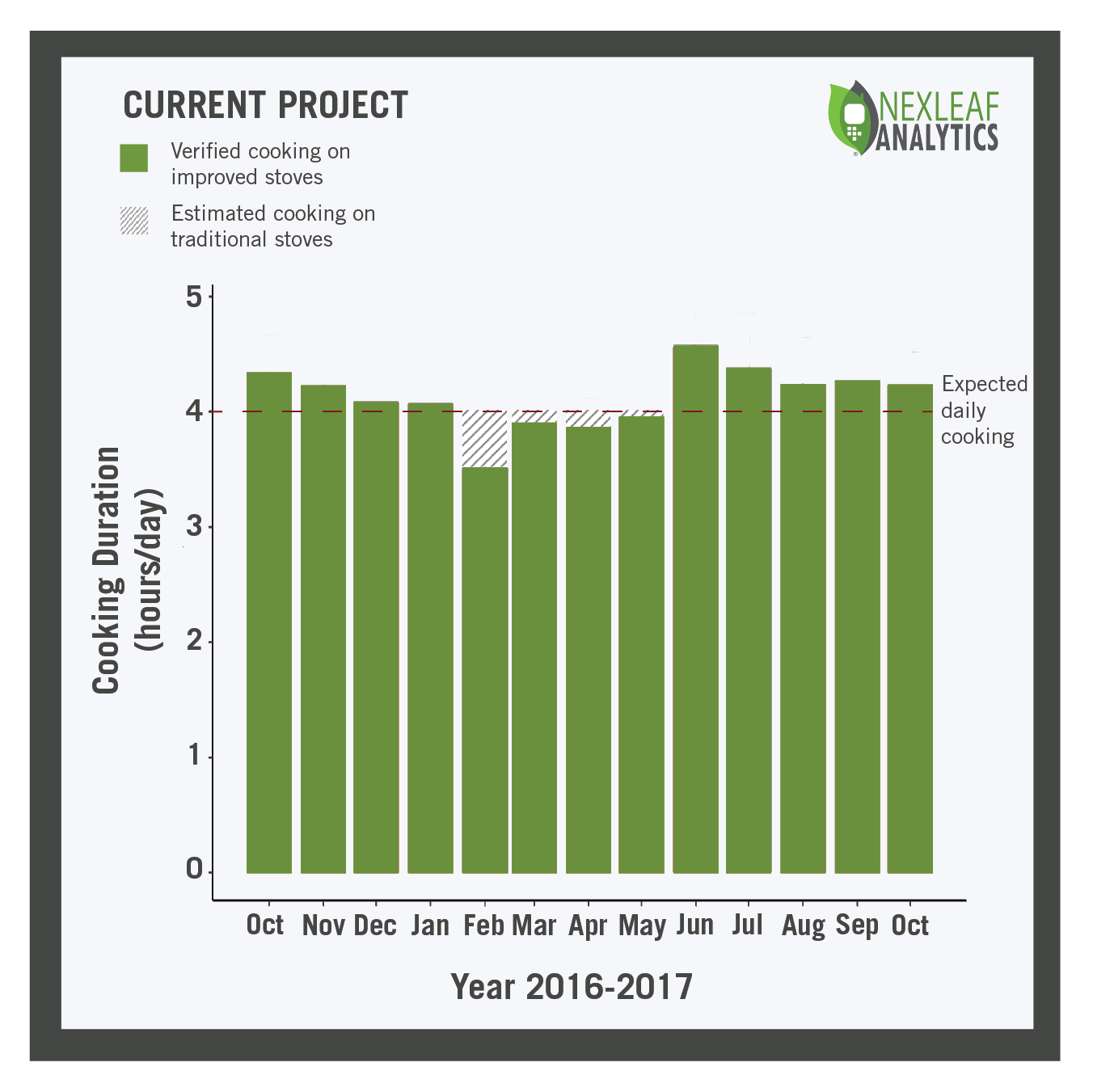 An average of 4.0 hours of cooking is in range with the amount of cooking we expect to see.

The sample size shown here from Kontakoli is small, but additional SCF households introduced in recent months are also showing promising results. As of July 2017, 144 SCF households across 9 villages were receiving payments through Vodafone M-Pesa, and 93% were showing sustained usage of their clean cookstoves.

As of July 2017, 144 SCF households across 9 villages are receiving payments through Vodafone M-Pesa, and 93% were showing sustained usage of their clean cookstoves.

Why Use Sensors Instead of Surveys? 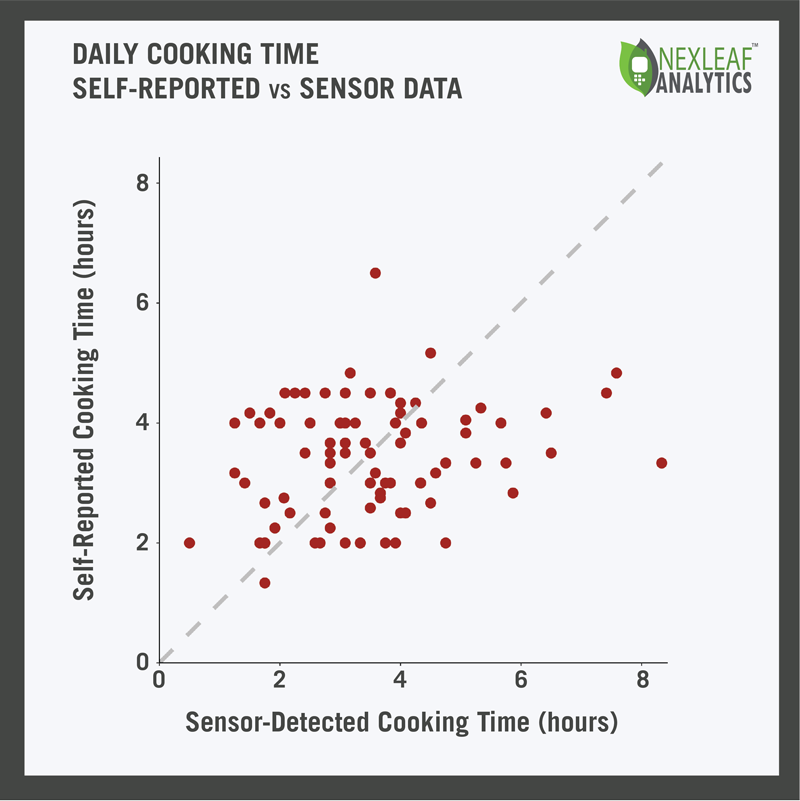 We created StoveTrace partly to reduce the burden of tedious survey work for clean cooking implementers. Our data also shows that self-reporting is not reliable, and that it is difficult for people to estimate their cooking time accurately.

Early on in our work, our research team asked a group of women in Uttar Pradesh, India to estimate how much they used their cookstoves each day. Even though these women understood that we were also measuring their cooking with StoveTrace sensors, the women still misestimated their cooking time. The plot to the right shows how far off self-reported cooking time was for each household, and it reveals that overestimates and underestimates are equally common.

This data demonstrates why objective sensor-based monitoring is necessary to compute accurate stove usage, especially on a per-household basis over a long period of time.

Read more about this finding in our Nature Climate Change publication.

What’s Next for Clean Cooking?

We are still analyzing the quantitative data from StoveTrace and generating qualitative data on which program variables are most important to achieving sustained usage. But we’ve learned a few things about designing successful stove implementations that we’re eager to share:

We’re excited to share these results, but we also acknowledge that a whole lot of work still lies ahead. Later this year, we plan to share StoveTrace data and findings from additional SCF implementations as we move to address the question of defining adoption. We look forward to working with our NGO partners, cookstove manufacturers, and clean cooking stakeholders at every level to improve the impact and effectiveness of clean cooking implementations the world over.

To learn more about our StoveTrace program, click here.

Nexleaf’s work is made possible thanks to generous support from and collaboration with our donors and partners. Beneventures Foundation and Leslie & Mac McQuown support climate financing for SCF.

Qualcomm Wireless Reach is a key StoveTrace program sponsor and provides support for StoveTrace-related data analytics and reporting in this series.